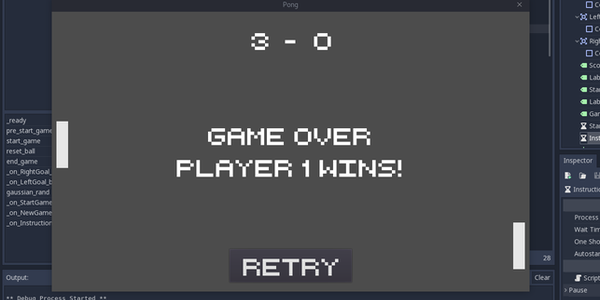 I've managed to eek this milestone in just before my second week jam. I've implemented the main loop, so now it's technically a game.

On startup, it shows a title screen that you can click through to start the game. I also added a 3 second countdown between goals. And lastly, the game ends when one player reaches the max score and a game over message plays. You can restart the game by pressing the button.

No time for juice. I can come back to this later though and juice it up if I'm feeling it.

This actually reminds me that in college I had an idea for a game called "Vector Field Pong". Where instead of assuming everything is some no-gravity inelastic collision ball, the playing field has a vector field on it that is somewhat random. Then you have the ball being influenced by the field so it can curve or loop around and stuff. That's the whole idea though. It's not fully developed.