A Night in the City 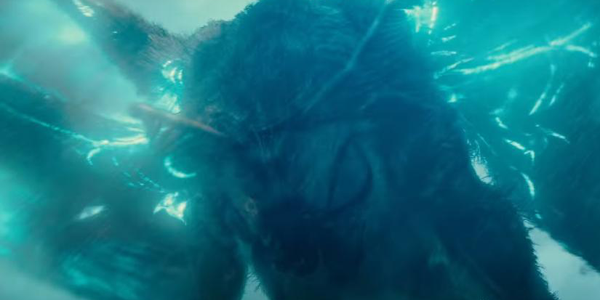 I took a food coma nap just now and had a lights-on nightmare. It's been a while.

I was in a fancy skyscraper in someone's penthouse room. We were in the bedroom hanging out with a bunch of people. The bedroom had a high ceiling and a bunch of bunkbeds. There were tall windows and you could see outside to a spectacular view of the city. The night was pitch black with light snow but there was a full moon, the coloring like a Tim Burton illustration.

Then suddenly, we were looking out the window and I saw a purple glow in the distance. Before we knew what was happening, I saw a glowing coming from the building over and then a giant laser comes out from the purple glow and blows a hole into the building next to us. People start panicking. The giant monster starts shooting some more and getting closer to our room. (It looks like some kind of green robotic humanoid thing at the center of the purple glow). I think about getting my things quickly but then one more laser blast hits so close, I just change my mind and we start heading out of there.

We head out into the hallway and everything starts to look like some kind of college engineering lab building. My friend Larry is apparently hurt from the blast rubble and I need to carry him on my back. The people in the next room over are dead. We go down a couple flights of stairs and the staircase ends so I need to go out into the floor and find out where it picks back up.

I enter this hallway that looks like some kind of dish return and I go through the staff entrance, where I brush past a bunch of slime covered equipement and into an "emergency exit" door. For some reason, everything on the other side looks like the bottom of an airplane hanger or something (you know, like the places where they send out giant robots in the movies). We're about to go down the rest of the way via elevator when I wake up.

Too short this time, I know. Wish I slept longer. :/