Harry Potter and the Douchebag at the Google Interview 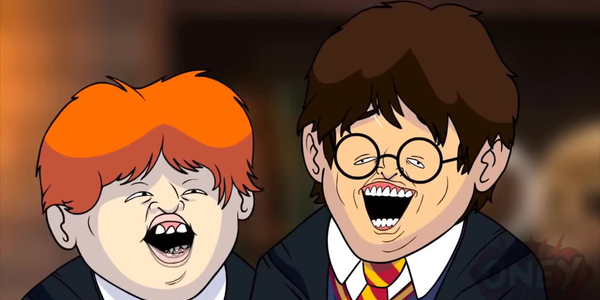 I just had the fucking weirdest dream. It started out where I was in the middle of interviewing for Google.

I was in an orientation room with a whole bunch of people and a small group of employees were giving a presentation about interview tips. The guy speaking (who looked like Patrick Stewart, btw) was talking about the selection criteria while we all stood in a giant circle around the edges of the room and gently passed watermelon like they were soccer balls. We had to stomp on them and if they squished, it meant that we were representing "rejected candidates". While that was happening, he was saying, "some of you might have a criminal record, and those people we just discard. And then for the rest we pass around their information to employees and use a popularity system".

At this last part, I spoke up and said, "What the fuck is a popularity system???" Everyone looked at me and stopped dead in their tracks and the presenters were also speechless and giving me bemused looks. I was screaming in my own head what the fuck am I saying, but I kept talking anyway.

"No, really. Are you saying that when we submit our stuff, it's basically ignored and we get in based on how much people like us?"

"Shut up", said this candidate from across the room. She had bright red hair with black streaks through it, the kind of colors you get when you dye it. (This is apparently someone I know from Facebook IRL, except that we don't hate each other.)

"What was your name again? Amanda?", I responded.

"Whatever, shut the fuck up! No wait, it was Samantha wasn't it? Shut the fuck up, Samantha." (Her real name isn't Samantha, either, but it is in this dream I guess)

At this point she rolls her eyes and snorts and I'm mentally freaking out. Everyone's staring at me now and the presenters have had the raised eyebrow at me the entire time. They are finally like, "ok let's continue. As part of the interview process you all need to use these kits to make a robot". I think the implication was that we were going to have a competition or graded on how well we made the robot but they didn't say anything about that and just distributed kits and told us to pair up and left us.

The kits were little toys, like some sort of kinex or lego mind storms thing. The objective was to make some sort of drone, so these kits had these weirdly advanced flying parts like propellers and high powered motors.

Obviously people next to me and everyone I asked just ignored me and I started panicking while everyone got into pairs. I finally made eye contact with this guy named Alex whom into his arms I practically threw myself and then we all dispersed out of the room and into the Google campus to find a place we could work on this stupid robot. Well, turns out Alex wasn't really into this whole thing which is probably why I was able to pair up with him and he said he had to go home because his mom needed him. We said goodbye and he packed up his little boy backpack and started walking. I was left to figure out how to build half a robot on my own. I wandered around to an engineering building cafeteria and there was a crowd of people in the seats just doing random homework and stuff. I found some other people working on their robot and I asked them if they knew if there was some competition that we needed to have later or something.

Samantha (that fucking bitch) just comes out of nowhere from behind me and is like "I'm not leaving no matter what" under her breath, implying that she is going to stand here and try to stonewall me until I leave without any answers. I don't think she meant for me to hear that, BUT I FUCKING DID (fuck you, Samantha)! It turns out I don't get any answers because then some kind of internet celebrity walks by (cause in my dream Google is just like that) and everyone gets distracted and starts talking to her but I have no idea who she is. I am finally fed up and start wandering around looking for places to work alone on my robot again and that's when my dream suddenly changes.

I'm now Harry Potter, except instead of the Google offices, I'm now at my old college (which was an old institution that had really Harry-Potter-like buildings). And I've got this piece of paper for college orientation for senior year and it has all these recommendations for what classes I should sit in on and preview and how many credits I need to graduate. And I'm like, oh ok, I did the first two (orientation and long term technical showcase) and now I just need an "arts and sciences" elective class to sit in. So I spend basically forever wandering around the whole campus look for room 421 in this random building but I keep finding cafes and other classrooms that are not 421.

Like, literally. I'm going through this rectangular building and I find this cafe in the middle of a tower and lining the walls of the tower surrounding the cafe is a spiral staircase that leads to another cafe on the second floor. I also go into the basement of that building into a pitch black tunnel that leads through a Chuckie Cheese, a department store mall, and a movie theater and then I come up out of the other end and I'm staring at the edge of the campus into a strip mall plaza that has two steakhouses next to each other. I go back into the tunnel and find my way into an admin building. I pass rooms numbered like 210, 220, 422, and I give up and just go into this small room the size of a closet that is filled with Apple Mac desktops. This class is how to be a fashion designer, so I leave.

I'm kind of worried that I'm missing all the classes I can sit in at this point when I'm walking back to the dorms wondering if I should just forget it and go get something to eat. I lean up next to this building entrance while I'm looking at my piece of paper thinking all this, when I hear Malfoy and his Slytherin cronies walking out.

Ok a quick side note, in my dream somehow I am magically Harry Potter and it's my 8th year because I had to stay back because I was busy dropping out of school and saving the world and stuff. Draco Malfoy is also an 8th year because he had to drop out of school to be a death eater and do bad guy shit blah blah blah. So now we're both back here in our 8th year, weirdly older than everyone else in the school, and this is because of actual details that happened in the Harry Potter books. The only difference is that after all that happened, me and Malfoy apparently both decided to go back to school to finish the last year because who knows why. I don't really like Harry Potter that much but I was reading a bunch of reviews for that new Harry Potter spin off yesterday so that's probably why I'm having this dream right now?

I try to cover my face with my paper and pretend I don't notice him and they are kind of stopped at the entrance talking to each other wondering what they should do now. I think we're supposed to be cool with each other now that the world is saved, but I don't know for sure, you know? So I'm like, "ok I should get out of here", so I start slowly walking away into the plaza.

I can feel them see me and then they all start quietly following me and I'm like "oh shit, oh shit". I get to the middle where there's this obelisk art installation and then I try to duck behind it and lose them. At that moment when I'm coming around to the back of the obelisk, I see a group of people at the end of the plaza walking by and one of them turns his head and looks at me. Everything starts going in slow motion and Mexican guitar music starts playing like this is a scene from Desperado or something. Even in the middle of the dream, I'm like, "hell yeah we look badass right now".

These people were dressed in military fatigues and wherever they went, a dark cloud kind of "stained" everything and turned it black for a second. This cloud followed them and turned everything they walked on black but only for a second and then it would slowly fade back to normal. I recognized these people at the interviewers from the Google thing but now they were death eaters for some reason.

Behind the obelisk I throw on my invisibility cloak and disappear in front of the dude's eyes. Malfoy and his gang rushes the obelisk and surrounds it only to find nothing there. I've already climbed halfway up the damn thing.

I look over and use wingardium leviosa to try and levitate myself to the roof of a nearby building and the spell goes crazy strong and my wand starts flashing and making these lights everywhere. I look at my hand and I have the Elder Wand and I just dismiss it like oh, my spells are more powerful because it's the Elder Wand (that's now how it works in the books, btw).

And I wake up just as I land on the roof.