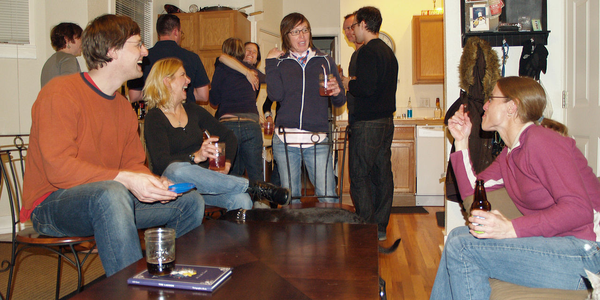 Ok, so there was a time when I was super obsessed with Choose Your Own Adventure (CYOA). I mean I've always really liked comics and books, but this was right when MS Paint Adventures got huge and everyone was doing the whole text adventure style game. I spent a couple hours one night during college pretending to be a video game on Omegle.

I never did anymore after this. I couldn't really engross anyone the same way with my other ideas of zombies and space operas. Also because these things are stressful and time consuming as hell. This was lightning in a bottle I guess.

There IS one thing I'm proud of and that this whole chat is 100% made up on the spot. That part with the three guys--one losing beer pong, another taking paper towels, and a third closing the sliding door--was all improvised. Heck, I had no idea what I was going to do when I wrote a dude setting paper towels down on the table before hand. It was a pure stroke of genius if I do say so myself.

Last warning... this devolves super hard into a harlequin romance novel at the end. You know how those things go. It's really hard to hold some random internet person's attention if it doesn't involve sex. Who would ever guess??

This Thought is part of Trollmegle